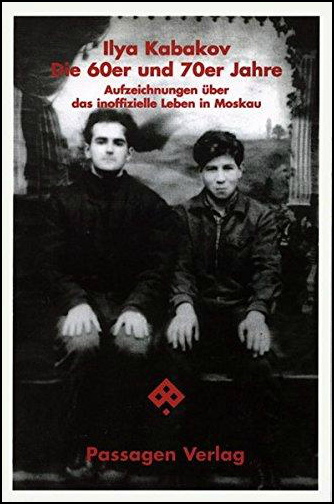 Ilya Kabakov, internationally most successful representative of the Moscow conceptual circle, is known for his visual-narrative installations (post) of totalitarian state in the museum space. In these records, he reconstructs the “unofficial” cultural life of the Russian metropolis, as it formed in the first decades of the post-Stalinist era between social upheaval and repressive stagnation, intellectual resistance and everyday adaptation, from the perspective of one of its key players. The theoretical reflection of one's own career, the development of aesthetic strategies, and comments by artists and writers close to Kabakov are accompanied by general philosophical reflections, historical material, and very personal “digressions”. The text, which oscillates stylistically between autobiography and art-theoretical commentary, gains the literary quality not least through the poetic force of a terminology developed in the hermetic discourse of the Moscow underground, which makes it, despite its superficial documentary form, a logical component of Kabakov's meta-narrative.