Do It Yourself: A Practical Independence Course for Women in St. Petersburg 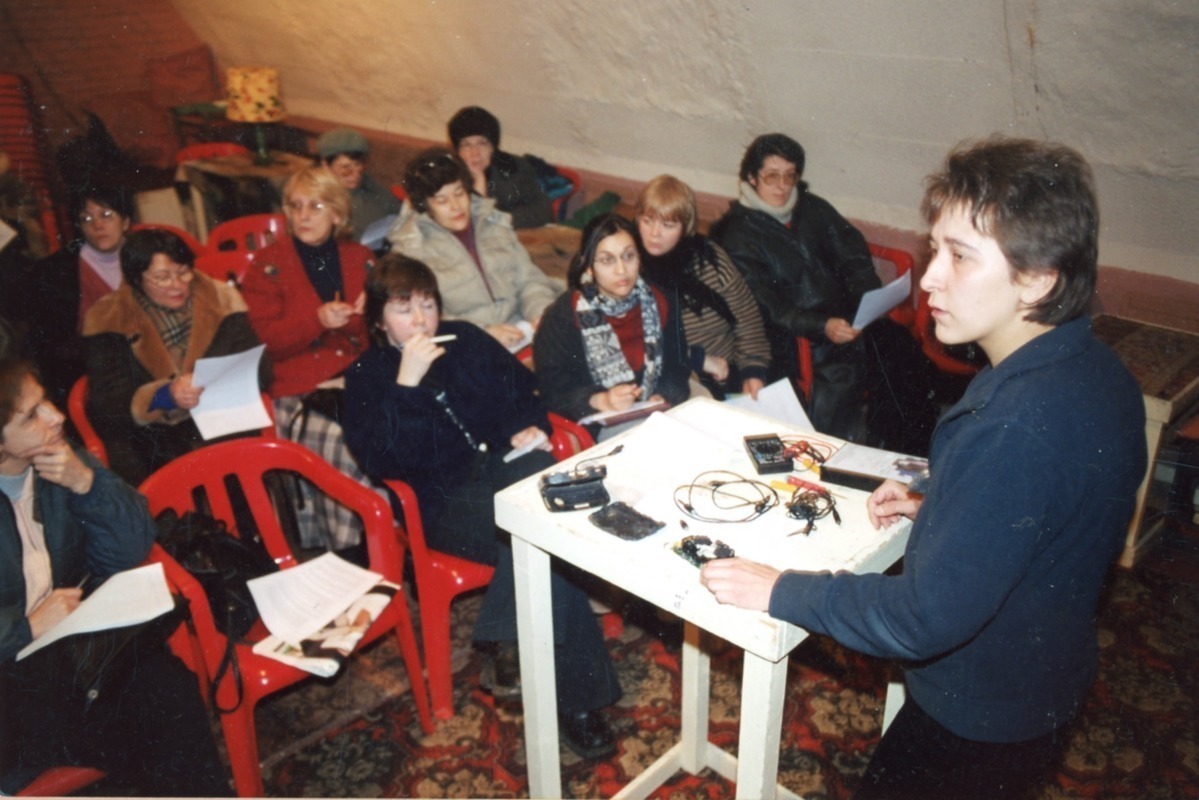 We wanted to create a course to foster emancipation not so much from men, but from our own lack of knowledge and powerlessness. Irina Aktuganova, Co-founder, Cyber Femin Club

The Do It Yourself course in practical independence for women was a project by Cyber Femin Club, the first feminist art organization in St. Petersburg, which was founded in 1996 by Alla Mitrofanova and Irina Aktuganova as part of Tekhno Art Center at Pushkinskaya 10 Cultural Center.

Cyber Femin Club organized art events and collaborated with various social organizations for women, including: Soldiers’ Mothers of St. Petersburg, created during the First Chechen War; and the Women Voters’ League, one of the first human rights organizations in the city. In September 1998, with the support of the George Soros Foundation and grants from Global Fund for Women and Mama Cash, Cyber Femin Club launched the Internet Center for Women, run by Irina Aktuganova, Alla Mitrofanova, IT specialist Olga Levin, and web designer Elena Ivanova. The center introduced NGOs working in women’s rights to computer technology, organized teleconferences, lectures, and seminars and offered free Internet access to all visitors. Center visitors learned to work with computers, e-mail, and search engines, studied the basics of html coding, text and graphics editing, built websites, and worked on social, art, and fundraising projects online. 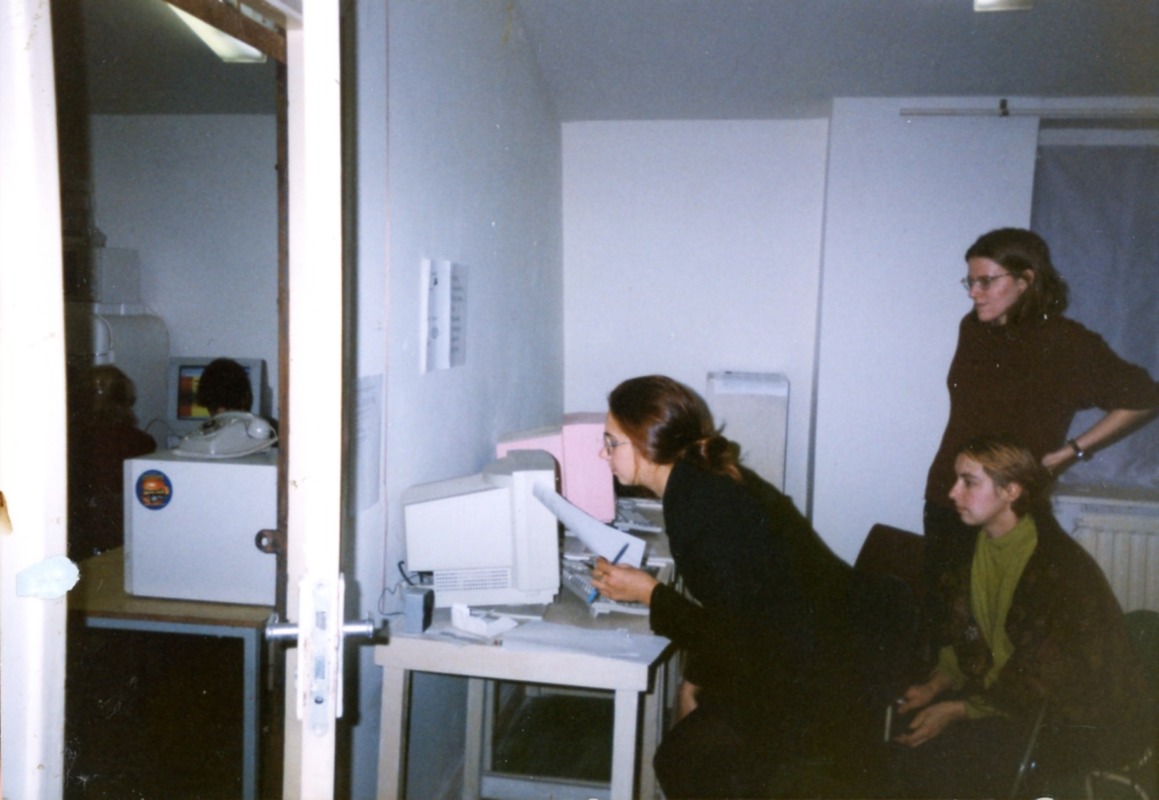 A course that would help women learn to cope with household problems as well as use computer technology was a logical next step in the development of Cyber Femin Club’s education program.

Irina Aktuganova on the idea behind Do It Yourself: “In fall 2002 Olga Levina came to me (when all the grants ran out she had to go and work as a system administrator in some company) and told me that they taught them to crimp cables on the sysadmin courses and women were protesting that it’s not women’s work. She thought it would be good to organize a course on technological literacy. I liked the sound of ‘crimping cables’ and came up with the name Do It Yourself, a course in practical independence for women. And then Olga and I decided that it would not be limited to cables but would include all hardware issues (disassembling and reassembling computers like they do with machine guns in the army), car maintenance, fixing home appliances, and renovation work. All the teachers were women.”

The first Do It Yourself practical independence course for women ran in 2004. Support from the Gagarin Foundation meant it was free for anyone who applied in person or via a phone call. Classes took place at Experimental Sound Gallery on Sundays and were in two blocks, Computers and Office Machinery and Home Appliances and Tools. The first half of the day was devoted to lectures on computers, where participants learnt where to buy them, which model to choose, and how to fix common problems. During the second half, the group studied home appliances and learnt to use tools such as drills, screwdrivers, and soldering irons. Next came plumbing and electrics classes where they could apply their newly acquired skills. 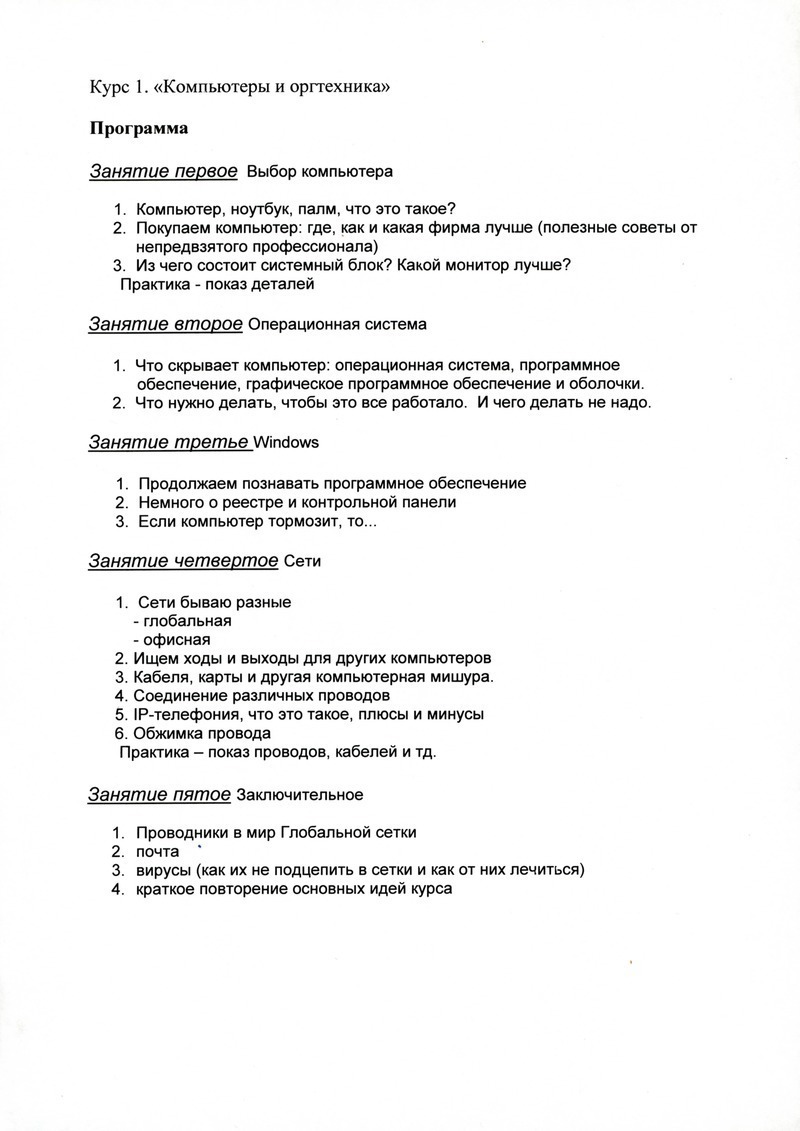 Curriculum of the Do It Yourself practical independence course for women, 2004 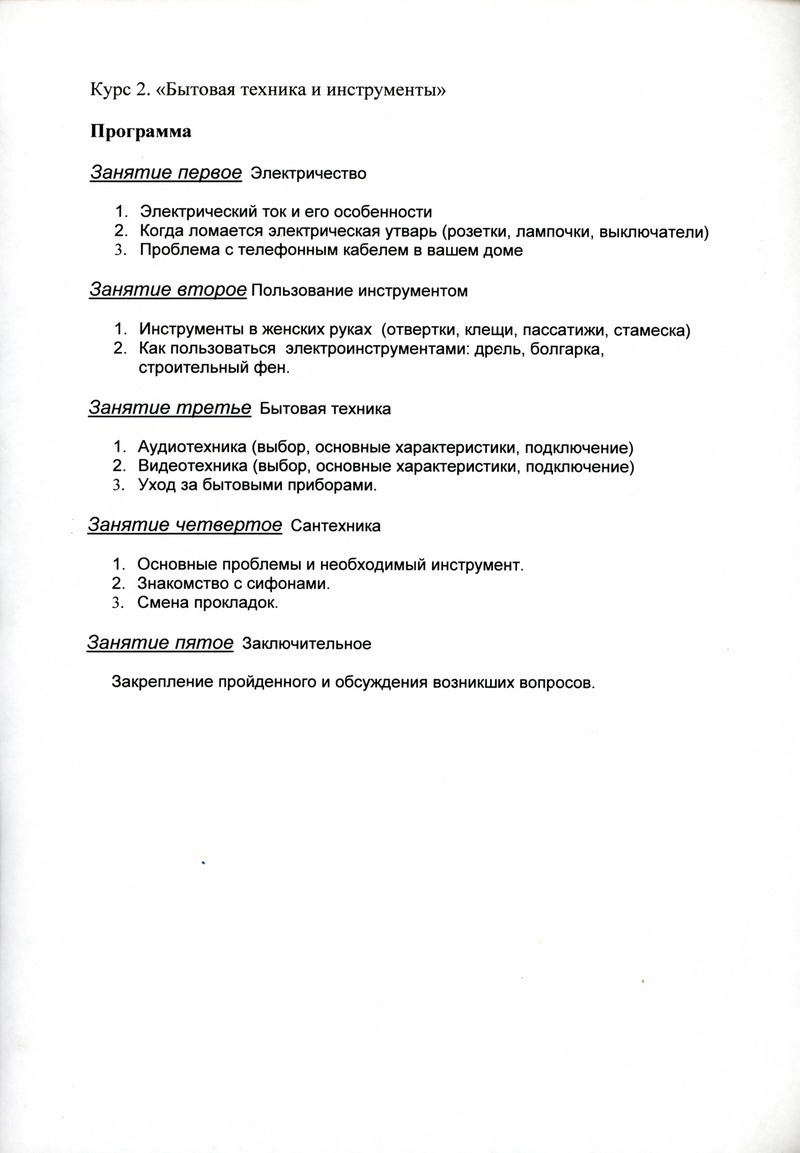 Curriculum of the Do It Yourself practical independence course for women, 2004

In its first year, the course was taught by Olga Levina and Tatyana Polyanova. Levina had trained as a system administrator and ran classes on computer technology, while Polyanova had studied at St. Petersburg Electrotechnical University and taught participants to fix home appliances and work with tools. The course was attended by thirty women aged from 20 to 60. Participants did not receive a diploma or completion certificate, but in line with St. Petersburg tradition the course finished with a ball. 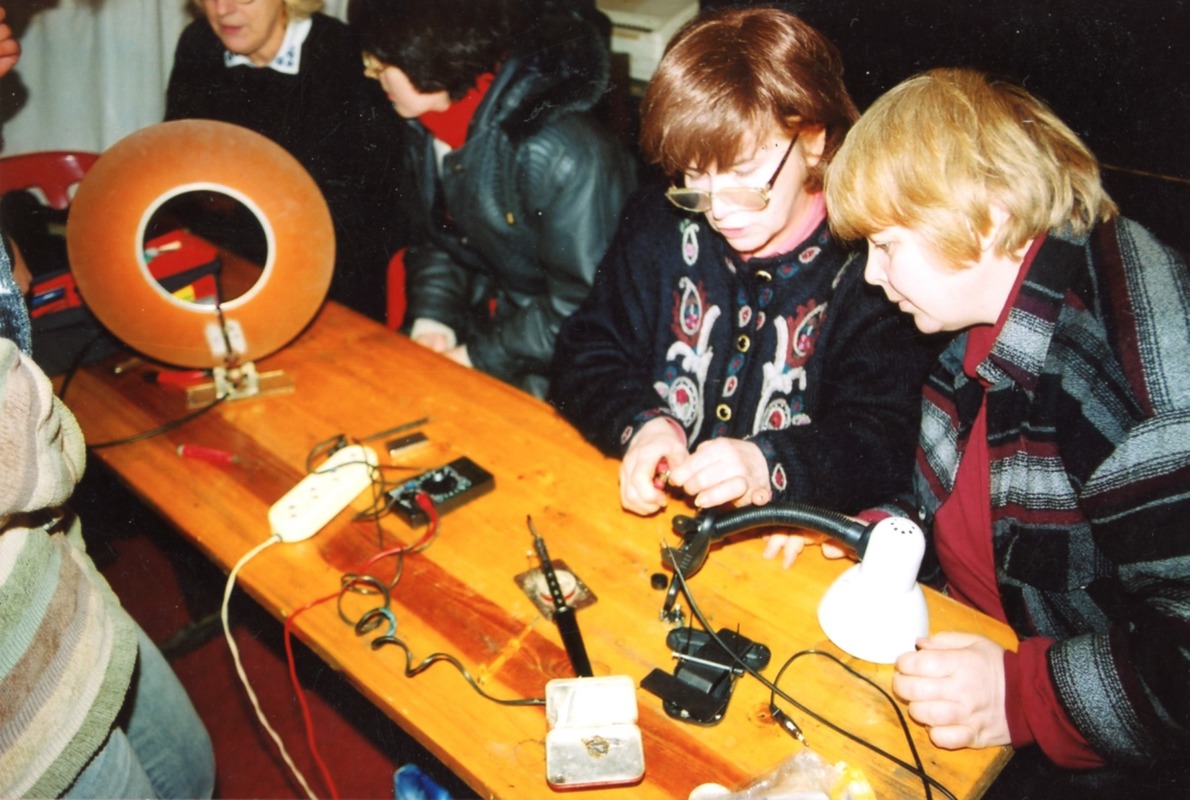 A class on the repair of home appliances, 2004. Photo: Irina Aktuganova

Garage Archive Collection holds a number of documents related to the Do It Yourself course as part of the Irina Aktuganova and Sergei Busov archive. These include a detailed curriculum for the first year of the course, photographs, and a selection of press cuttings on this unique project. 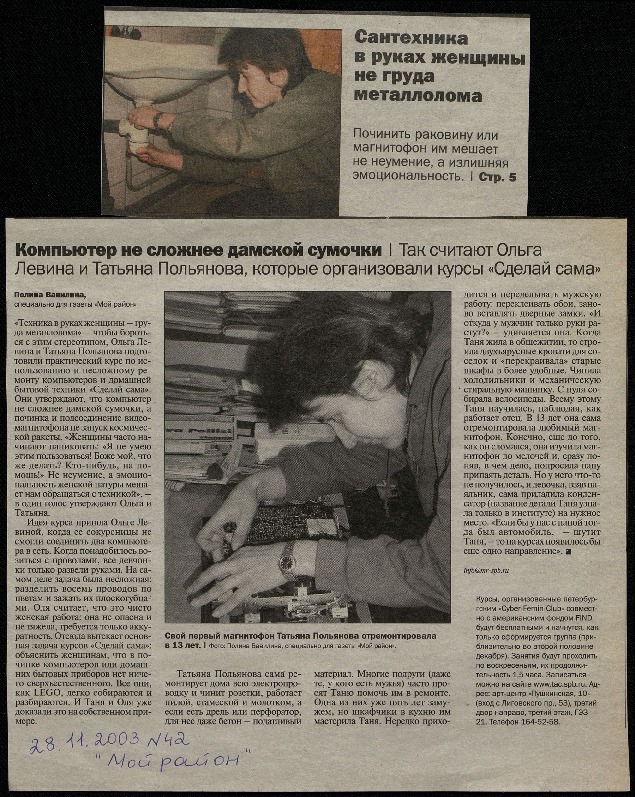 Article announcing the launch of the course in the local newspaper Moi Rayon, 2003

Feedback from participants and their interest testified to the importance of Cyber Femin Club’s education project. However, we do not know as much about the rerun of the course, which took place in 2005/2006 and had a broader curriculum that included classes in home renovation and automobile maintenance and repair. New teachers Olga and Ksenia joined the course. Unfortunately, their family names cannot be located in the archive documents.

Based on the 2005/2006 course, Cyber Femin Club published a textbook with class materials and Irina Aktuganova’s drawings, which is also part of Garage Archive Collection. 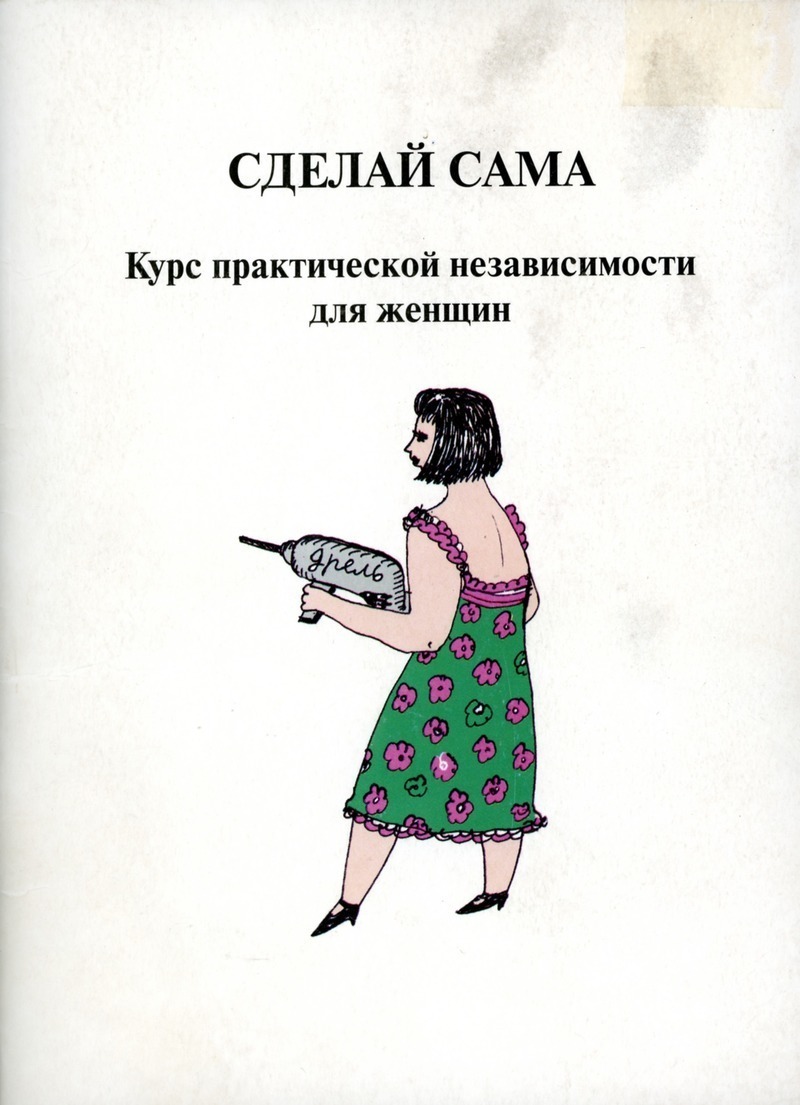 Textbook for the Do It Yourself course in practical independence for women, 2006

Documents in the archive also include notes taken by participant Nadezhda Kulikova and published in the local newspaper. A journalist who was at that time learning to drive, Kulikova kept a diary where she described the classes and her experience doing simple repair jobs, such as changing a tyre, spark plugs, and fuses. 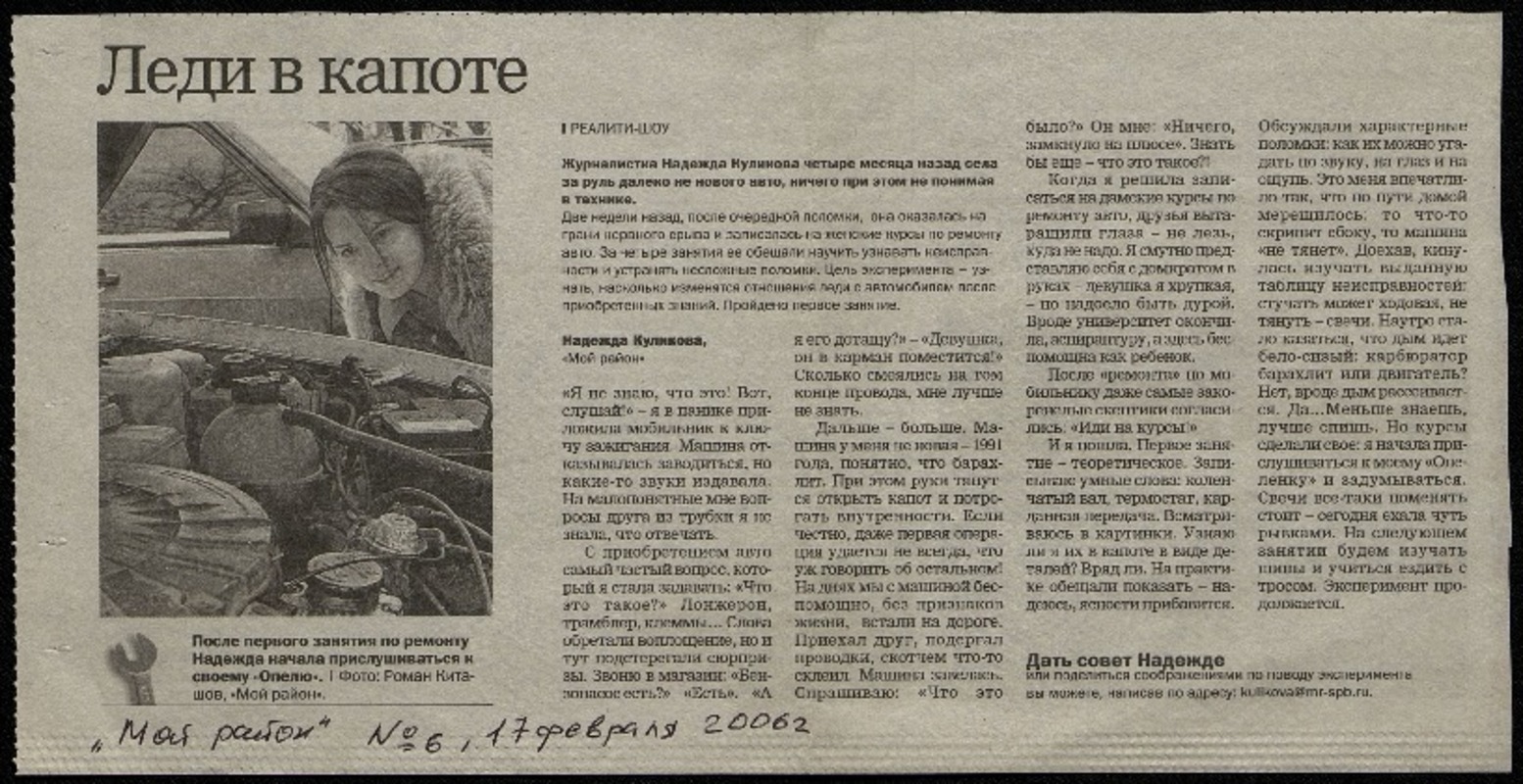 Article about Do It Youself in the newspaper Moi Rayon, 2006

The significance of the course for the Russian feminist discourse and art practices is yet to be fully understood. Conceived as an art project and carried out in the field of art activism and DIY culture, Do It Yourself responded to the need for a new basis for self-identification among post-Soviet women.

Irina Aktuganova explains how projects like Do It Yourself can make a difference:

“This project had its own complex genealogy, which we never discussed, as to us it was obvious. We were all Soviet women. And Soviet women could do anything: they were technologically literate because many studied to be engineers. That was what distinguished us from Western feminists and cyberfeminists. For them, providing women access to engineering and programming was an emancipatory practice, whereas for Soviet women those were part of their daily routines, which they hated. A very interesting flip happened with this engineering education. In Soviet times they told us that women should be engineers, work in factories, shift railroad sleepers, and so on, but those were men’s jobs and we wanted to be women and live our womanly lives. In the West women didn’t work-they were provided for by their husbands-and if they paid our husbands more, we would sit at home and take care of the children. That’s what many women thought. When by the end of the 1990s women had saved their families from starvation and life started going uphill, many chose to be supported by their husbands or partners. The media began promoting archaic values and advertising created the female figures of the kept woman, the happy wife and mother, etc. Feminism had no place here. The name of our course rhymed with Ya sama [I’ll Do It Myself], the only feminist show on Russian television, which was hosted by Yulia Menshova from 1995 through 2001. We saw it as creating an opposition to this strange new public sentiment, as we could not believe that Soviet women had fallen so easily for the bourgeois gender stereotype. To us, that revival of patriarchy had no foundation, and generally speaking that turned out to be the case.

I suppose women came to our course not only to learn universal skills and become independent from men but also to make a gesture, or even a political statement.”