An interview with Sasha Ershkova, a former cashier at Garage Museum, on her experience in sketching visitors

Garage Museum of Contemporary Art's institutional archive contains sketches and drawings by Alexandra Ershkova, who was the cashier and currently is the office manager at Garage. Alexandra watched the visitors and created her own system of visual tropes, which reflects the behind-the-scenes side of the Museum's life.

Where and when were you born?

Did you learn to draw?

I have no art education. I did not study to draw.

How did you get to Garage?

I came to Garage in 2011 to get a job as a tour guide. I did not pass the selection process, but I was invited to take the position of cashier. I refused because I didn't want to be a cashier anymore. But after some time, I called back and agreed.

What was your job when you started drawing?

I liked to draw as a child. From the age of six, I could sketch something, for example, an extravagant character seen on the TV. I always had a notebook where I took notes and made drawings. I began to draw more often at the academy (I studied Cultural Studies at the Academy of Slavic Culture). I was strongly influenced by lectures on art, sculpture, and architecture. I feel a special affinity with the impressionists and modernists.

During which exhibitions did you make more sketches?

Most of my sketches were made in the Shigeru Ban building. I was drawing during the mounting and dismantling of exhibitions. We called that period the intertime. I don't remember a specific exhibition, only Performance in Russia: A Cartography of its History maybe and, perhaps, Grammar of Freedom. The latter inspired Valery Serikov and me (he worked as a guide back then) to create a whole album of characters. By the way, he is the main conservator of my works. He carefully kept every sketch of mine. Later, having compiled an entire collection, he showed it to our archive staff. This is how some of them were displayed in the Museum's present building in the Four Seasons pavilion.

How did the desire to sketch visitors emerge?

When I see an interesting character (especially at a moment when they express a unique vision or opinion) or observe a funny, absurd situation, I have the urge to sketch. Unconsciously. It takes me a few seconds for this.

Of course, there is always this wish to draw the attention of others, to focus on what seemed comic and hilarious to me. The most important thing is that I did not make all these Garage sketches for myself—I did them for my colleagues, who were also witnesses of what was happening around us.

How did you choose the plots to be sketched?

The reception desk is a great place for observing and "catching" plots. This is the "front line," a place to meet with society in its most truthful, I would say, exposed form. Protagonists and stories just ask to be drawn—you only need to manage to snatch that special one out of many.

How did the Museum staff react to the move to a different building?

We felt sorry to part with the Shigeru Ban building, as we did before, with Bakhmetevsky Bus Garage, but we were anticipating a meeting with the Four Seasons building, renovated by the renowned Rem Koolhaas. Garage has to be roomy. We wanted to see new grandiose projects, crowds of people. We gladly reacted to everything new and were looking forward to the opening!

Can you comment on some of your drawings, tell the stories behind their creation? 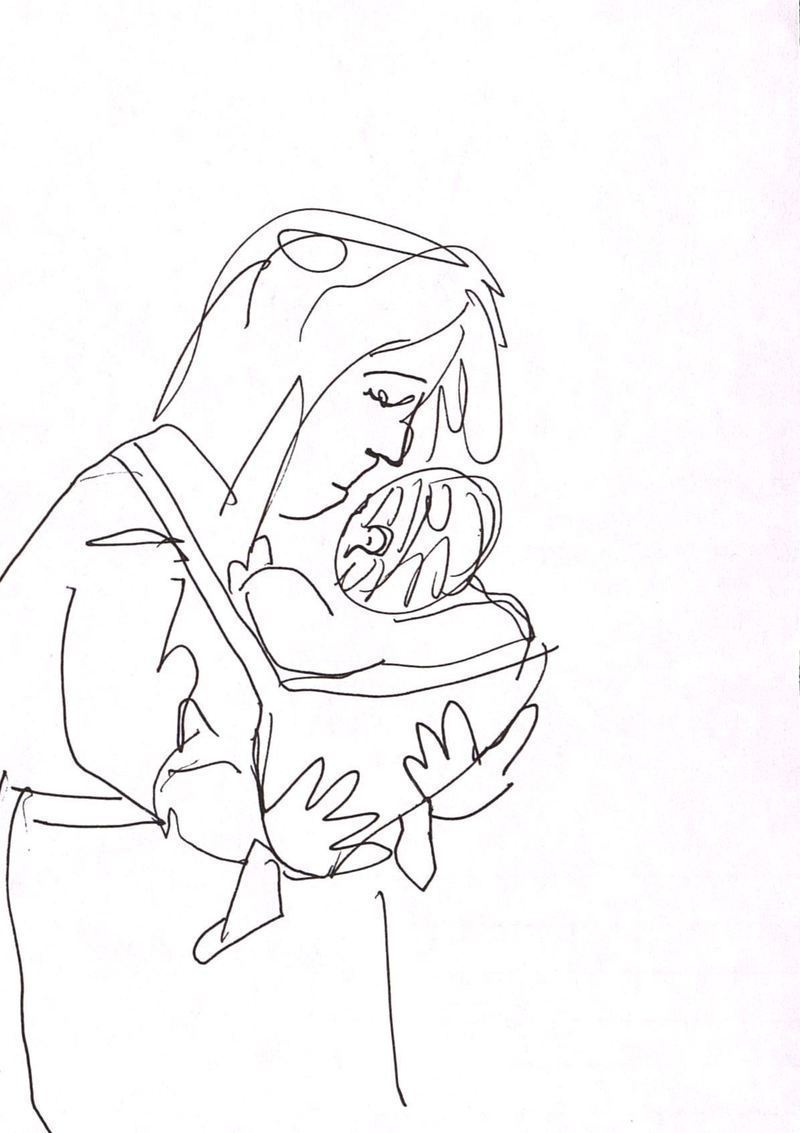 The drawing was made in the Four Seasons pavilion and is associated with the "mom with a baby" visitor category. When the pavilion just opened, visitors with baby carriages were forbidden to go up to the second floor, causing loads of negative emotions in them. As an alternative, the Museum began to offer such visitors baby slings, in which the staff helped to seat the kids. The sketch shows everyone's pacification after a lengthy argument. Mother and child are happy and reunited thanks to a sling. The reception staff, who were left behind the scenes, look at them wearily and with affection. It's all over now. 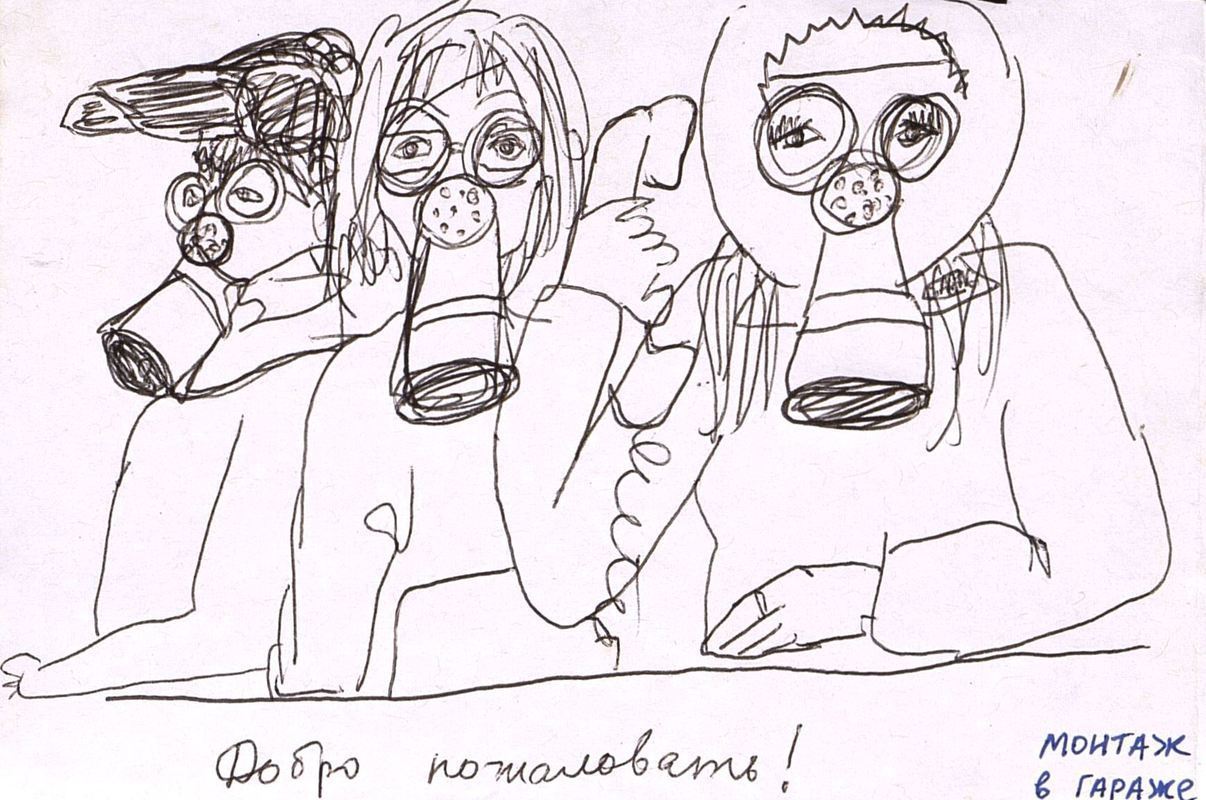 This sketch made in the Shigeru Ban pavilion represents the so-called intertime. There are no ongoing shows in the pavilion; the installation work is underway. Dust and iron shavings are all around the space. One would wonder what the Museum's staff does at such a time when there are no ticket sales or guided tours… But the Museum never closes; it always waits for guests. Our team is ready to answer any questions. 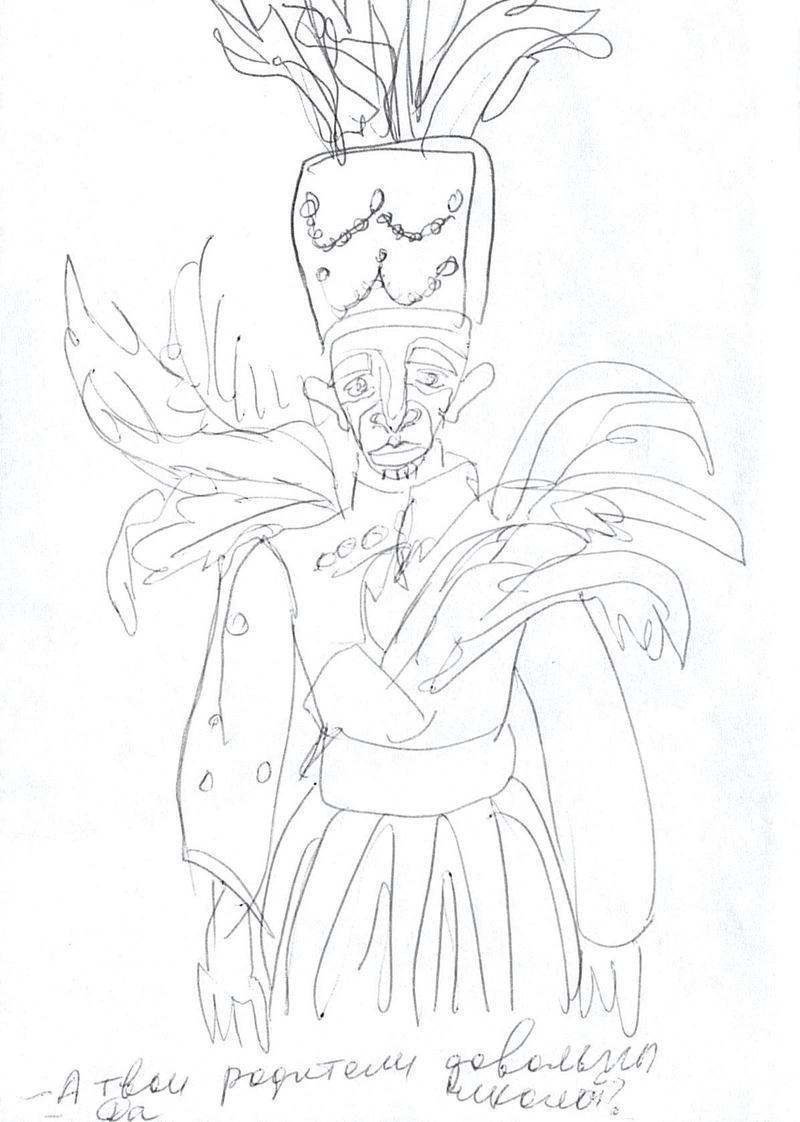 The first drawing portrays the hero of an interview taken in the framework of the Köken Ergun exhibition Young Turks. Wearing his incredible feathered festive costume, he is like a bird caught off guard by people with cameras. He answers their questions simply and sadly. 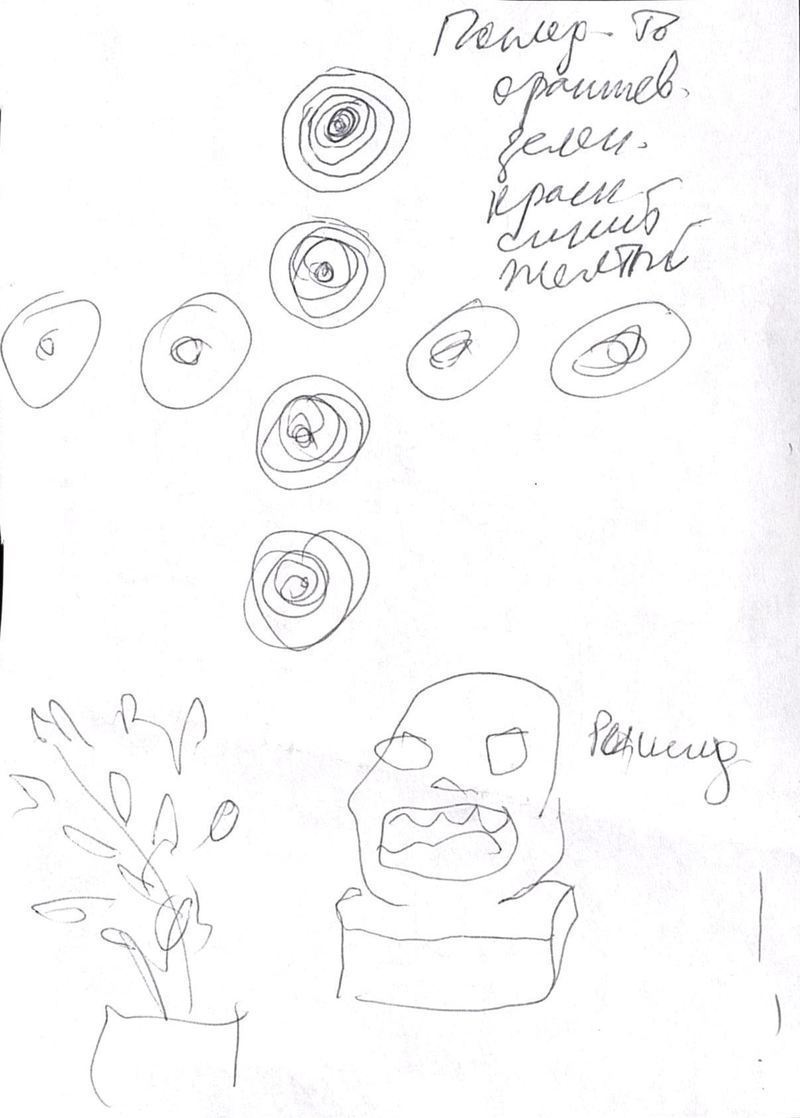 The second drawing is a schematic representation of a fragment of mounting Rashid Johnson's exhibition Within Our Gates. In memory of the show. A coconut oil head and a flower in a pot. The color scale is inscribed in the right corner so that the original combination can be reproduced. 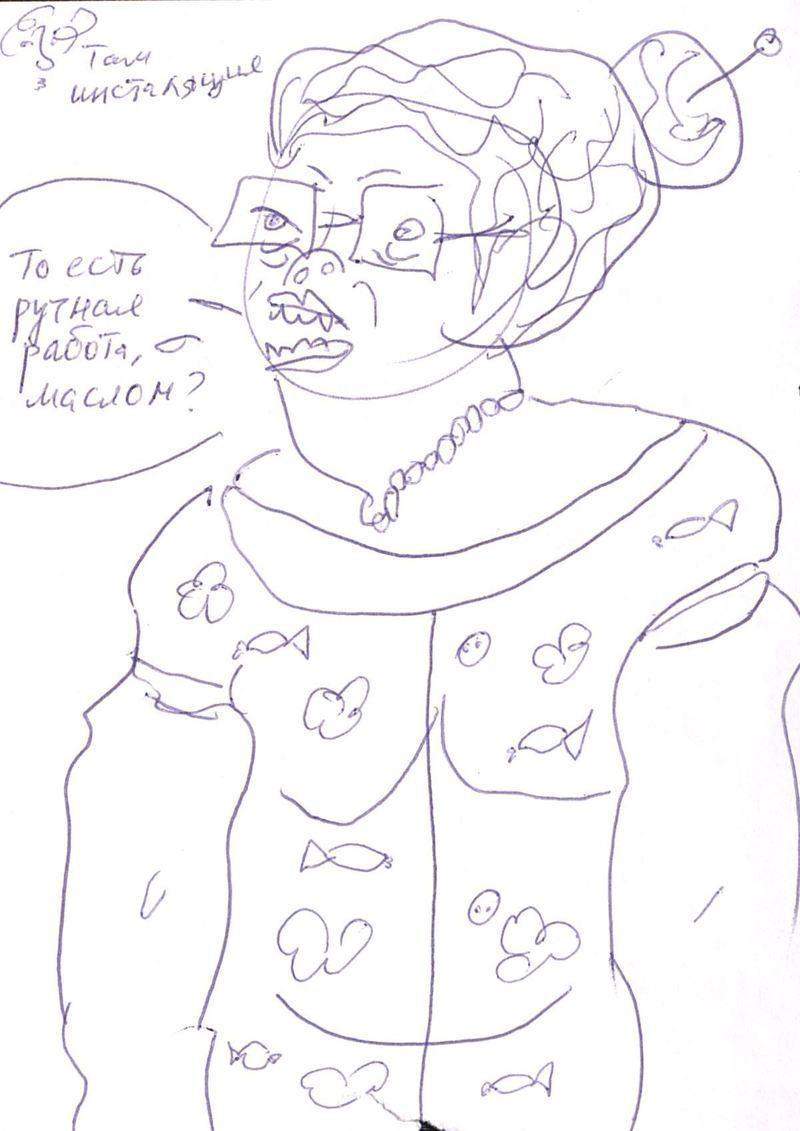 This sketch documents the birth of a new definition of the concept of "Installation."

What do you currently do at the Museum, and do you make sketches? Can you show any of your new work?

I work as the office manager at Garage.

I haven't been doing any more sketches in this genre. The Museum's very environment back then instigated the desire to create: the constant change of exhibition designs, a continuous flow of people, and new information. There were also extraordinary creative people around me—my colleagues who inspired me. I wanted to please, surprise and amuse them. I can't draw without inspiration.

I do not draw a lot nowadays. I bring some sketches from travels, but they are of a different type.