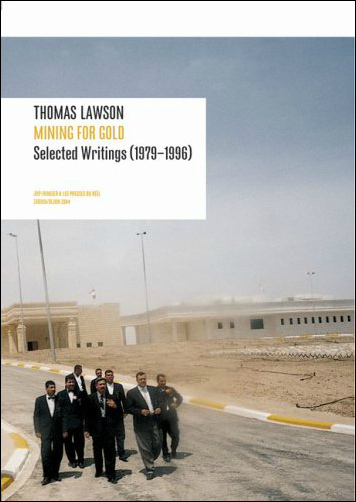 More than any artist-writer of his generation, Thomas Lawson has the makeup of a true journalist. He is an embedded correspondent, a polemical editorialist, sending his first-person dispatches from the front lines. He knows the terrain from many vantage points: He is an artist, publisher, occasional curator and academic (current dean at CalArts) in addition to being a writer. Reacting to the ambient hegemony of late modernism and its avant-garde myths, Lawson is determined to take sides, to make critical distinctions, attempting along the way to enunciate a progressive position from the very heart of an increasingly reactionary milieu. This collection of essays focuses on the emergence of appropriation and includes such seminal texts as “Last Exit: Painting.” Mining for Gold provides a comprehensive narrative of some of the most trenchant ideological quarrels to have surfaced from within the art world of the 1980s.