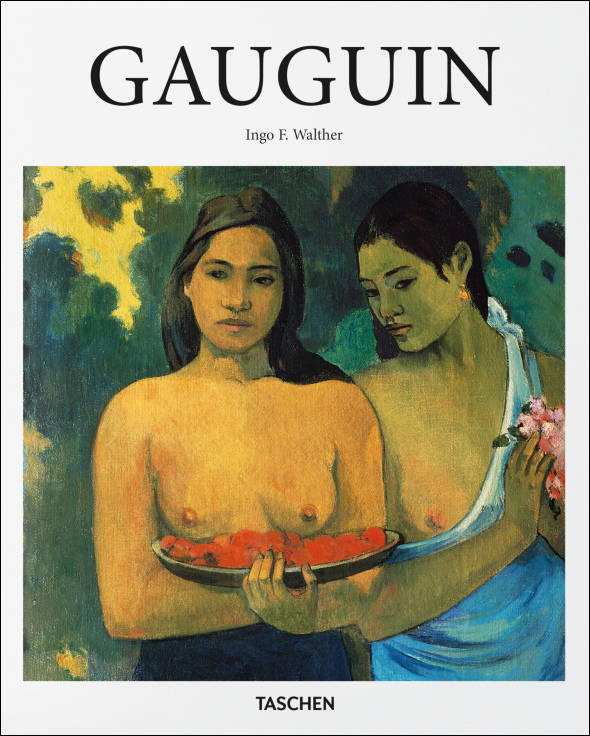 Paul Gauguin (1848–1903) was not cut out for finance. Nor did he last particularly long in the French Navy, or as a tarpaulin salesman in Copenhagen who did not speak Danish. He began painting in his spare time in 1873 and in 1876 took part in the Paris Salon. Three years later, he was exhibiting alongside Pissarro, Degas, and Monet. A querulous, hard-drinking individual, Gauguin often called himself a savage. His close but fraught friendship with the similarly temperamental Vincent van Gogh climaxed in a violent incident in 1888, when Van Gogh purportedly confronted Gauguin with a razor blade, and later cut off his own ear. Shortly afterwards, following the completion of a midcareer masterpiece Vision After the Sermon (1888), Gauguin took himself to Tahiti, with the intention of escaping “everything that is artificial and conventional…” On Tahiti, Gauguin’s unfettered joy in the island’s nature, native people, and figurative images leapt over a prolific output of paintings and prints. In works such as Woman with a Flower (Vahine no te Tiare, 1891) and Sacred Spring: Sweet Dreams (Nave Nave Moe, 1894), he developed a distinct, Primitivist style that positively oozed with sunshine and color. In the tradition of exotic sensuality, his thick, buttery lashings of paint lingered in particular over the curves of Tahitian women. Gauguin died alone, on Tahiti’s neighboring Marquesas Islands, with many of his personal papers and belongings dispersed in a local auction. It was not until a smart art dealer began curating and showing Gauguin’s work in Paris that the artist’s profound influence began making itself felt, especially to the new breed of French avant-garde artists, such as Picasso and Matisse. This book offers the essential introduction the artist’s truly colorful life, from the Impressionist salons of 1870s Paris to his final days in the Pacific, productive and passionate to the end.