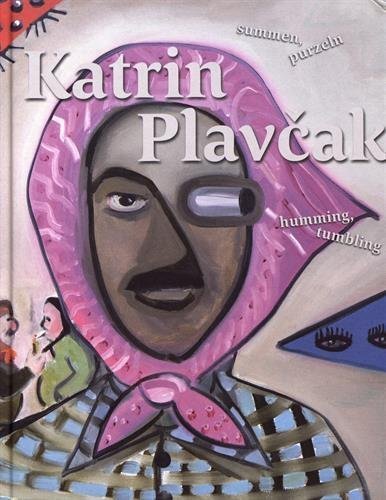 While postmodern painting has always been accommpanied by the discussion about its end, it has at all times pointed to its most important characteristic: due to its discursive character, it is able to weave a never-ending network of representations. The same applies to the works by Katrin Plavcak (born 1970 in Gütersloh, & grew up in Austria). Her non-impasto oil and acrylic paintings draw figurative references to Dix and Grosz, Magritte and Picasso, Höch and -Lassnig, as well as the practice of naive painting, where -perspective and spatial condi-tions are suspended while several narrative strands co-exist. Katrin Plavcak pur-posefully examines the history of images originating from comics, cartoons, illustration and, quite broadly, from technical visual media. Clichés, distortions, trivia-lizations, and spectacles, as produced by the media industry and whose logic is also quite -seductive to art and its institutions, form an aesthetic fundus from which, in her own painterly language and in a highly qualified transformation process, she formulates her artistic point of view. Katrin Plavcak neither resorts to pathos nor any ideologically “correct” position, but rather directly pursues her interest in Dada or Surrealism, art movements where the achievements of photography, film and advertising, and, last but not least, popular magazine culture in methodical combination with montage and collage, have influenced the avant-garde concept. In addition, Katrin Plavcak is a great -portraitist who knows how to psychologically -pinpoint the characteristics of her found or invented -figures with great -painterly skill. Thus, if these days the post-factual age is heralded because we are inundated with infor-mation, to the point where it becomes meaning-less to us, the -opposite pole could be that kind of art.