In the absence of stable institutional support, art life in the regions develops spontaneously and unevenly, with alternating phases of activity and decay producing a catastrophic cycle. There is no time to form and gain a foothold, and the participants of each new stage generally start from scratch, without making use of the experience of their predecessors.

In Perm, one of such phase occurred in the 1990s. The first private galleries, absurd actions by ODEKAL, bold gestures by the Nekhudozhniki (Nonartists) group, and concerts by the bands Pagoda (leader Andrey Garcia) and Khmeli-Suneli (founder Evgeny Chicherin) were consonant with the spirit of emerging freedom. In the 2000s, the city’s art life began to decline, although there were still important personalities, such as the media artist Sergei Teterin. The next cycle unfolded in 2008–2013, during the so-called Perm cultural revolution—a large-scale political project that used culture as a driver of change to turn an industrial city into a new cultural capital, attracting tourism, business, and investment.

However, the five years of the “Perm experiment” resulted in a setback. From summer 2013 it was gradually wound up “from upstairs,” the same way as it was initiated. Exhibitions began to close, iconic festivals and events were canceled. The formal cause was the scandal around the project WELCOME TO SOCHI 2014 by Vasily Slonov, exhibited as part of Perm’s White Nights Festival in 2013. One of the main ideologists behind the Perm cultural project, Marat Guelman, was fired as director of PERMM Museum of Contemporary Art, an institution that defined itself as the flagship of change. The city's public art program closed down: the “red men” moved from the streets to a warehouse.

[Ivan Kolpakov’s critical review in the wake of the “Perm revolution”. Interview with Vasily Slonov about the closing of his solo exhibition in Perm.] 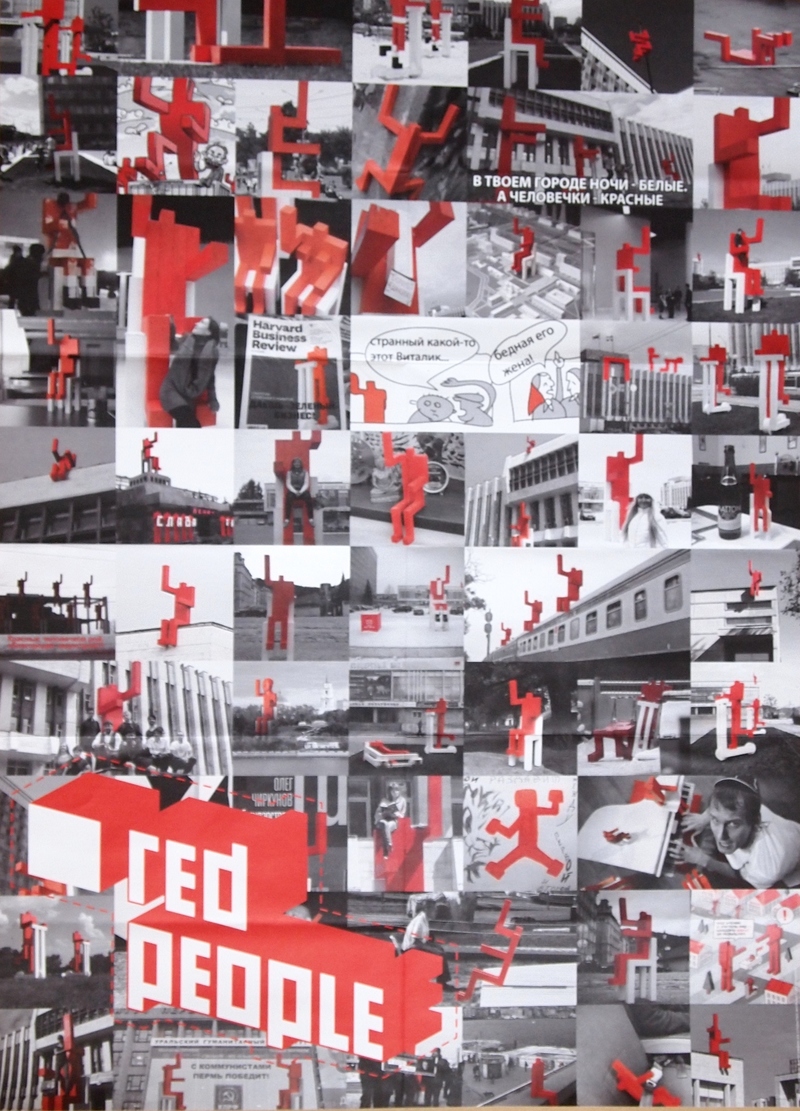 Ivan Kozlov, “Following in the ‘Red Men’s’ Footsteps” from the booklet of the exhibition Avocado, or Identity Constructor by the art group Pprofessors and friends

The year 2014 was a difficult period in Perm’s artistic life, a time of breakdown and restructuring, disappointments and new beginnings. The lack of events and general frustration provoked by the forced curtailment of the cultural project worked as catalysts for new processes. However, horizontal DIY initiatives did not emerge immediately. For about a year, the cultural life of the city remained in painful suspended animation. Only toward the end of 2014, was the art community able to assert itself in the public space, with independent exhibition venues and alternative festivals opening one after another. Against a background of common disappointments and the migration of friends and acquaintances, many adopted the simple stance: “We are here, so we have to do something.”

Nevertheless, the “Perm cultural revolution” had a significant impact on the city. And even though it did not resolve the region’s fundamental problems, the first museum of contemporary art outside Moscow and St. Petersburg was established in the city, where the professional level of artists and cultural workers also significantly increased and, most importantly, a lively and open audience developed.

During the crisis, local institutions were unable to compensate for the lack of major cultural events, such as the White Nights or Living Perm mega-festivals, which accumulated multiple independent initiatives. The art community fragmented into minor groups based around common values ​​and interests. Soon these groups began to separate and run events for themselves and their inner circles, rather than a wider audience.

The years 2014–2019 were the heyday of  Perm’s artistic self-organizations, with four initiatives emerging in the city one after another during this time.

The first to open at the end of 2014 was Dom Gruzchika (Loader's House) Center for Contemporary Culture, a couple of days later modestly renamed Contemporary Art Laboratory. The studio of the Loader's House, united with the exhibition space, was located on the ground floor of a 1930s listed building, hence the self-organization’s name.

The history of the Loader's House dates back to three friends, street artists Alexey Schigalev, Maxim Blax, and Alexey Ilkaev (Sad Face), who were forced to look for a new studio after their previous space in Perm Art Residence, which they had occupied for several years, became covered with poisonous fungus over the summer, and it was no longer possible to work in it. With the support from the Art Residence curator, Perm artist Yuri Lapshin, Schigalev, Cherny and Ilkaev’s first exhibitions devoted to performance practices and experimentations with painting took place in the new space. This is how the element of street art was looking for ways to interact with a gallery space new to it.

While searching for a new space, Aleksey Shchigalev traveled to St. Petersburg, where he visited the independent artist-run spaces Pushkinskaya–10 Cultural Center and North–7 Base

Inspired by this experience, he invited friends to create something similar in terms of spirit and principles in Perm. It took just a few days from concept to implementation. The inaugural exhibition was organized as a friendly apartment event with a dense hang of works by the gallery’s co-founders.

For about a year, the Loader's House operated dynamically, opening exhibitions once or twice a month. As a rule, these were small solo projects by like-minded artists based in Perm and nearby cities.

With the arrival of curators Anastasia Ulanova, Natalia Charakhchan, and Marina Pugina, the dynamic decreased, giving way to a more thoughtful and experimental approach to materials and the space. 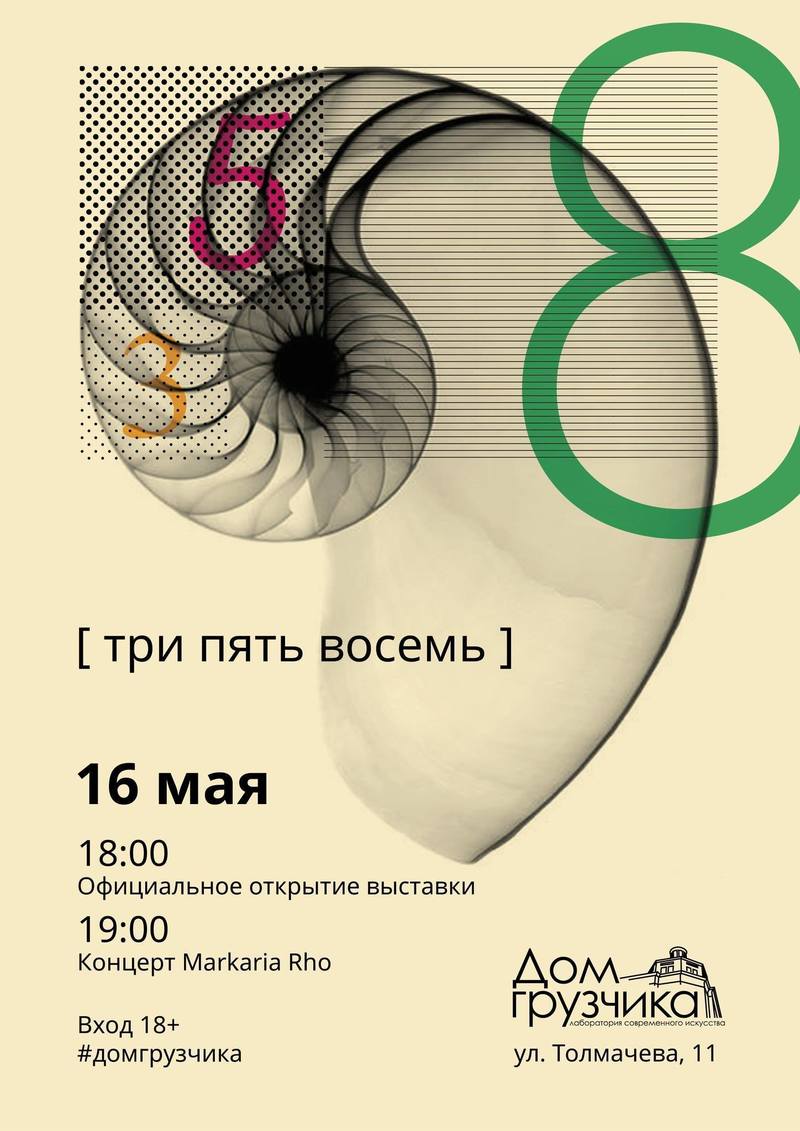 In three years, the laboratory organized over 60 events, confirming the importance of this venue for the local art community. The lab format proved liberating: it gave freedom to experiment and creative interaction. For emerging Perm-based artists, the Loader's House became a kind of school and many, including Grigory Taur, Lena Rembo, Slava Triptikh (Nesterov), and Alexander Koshelev, had their first solo exhibitions there. 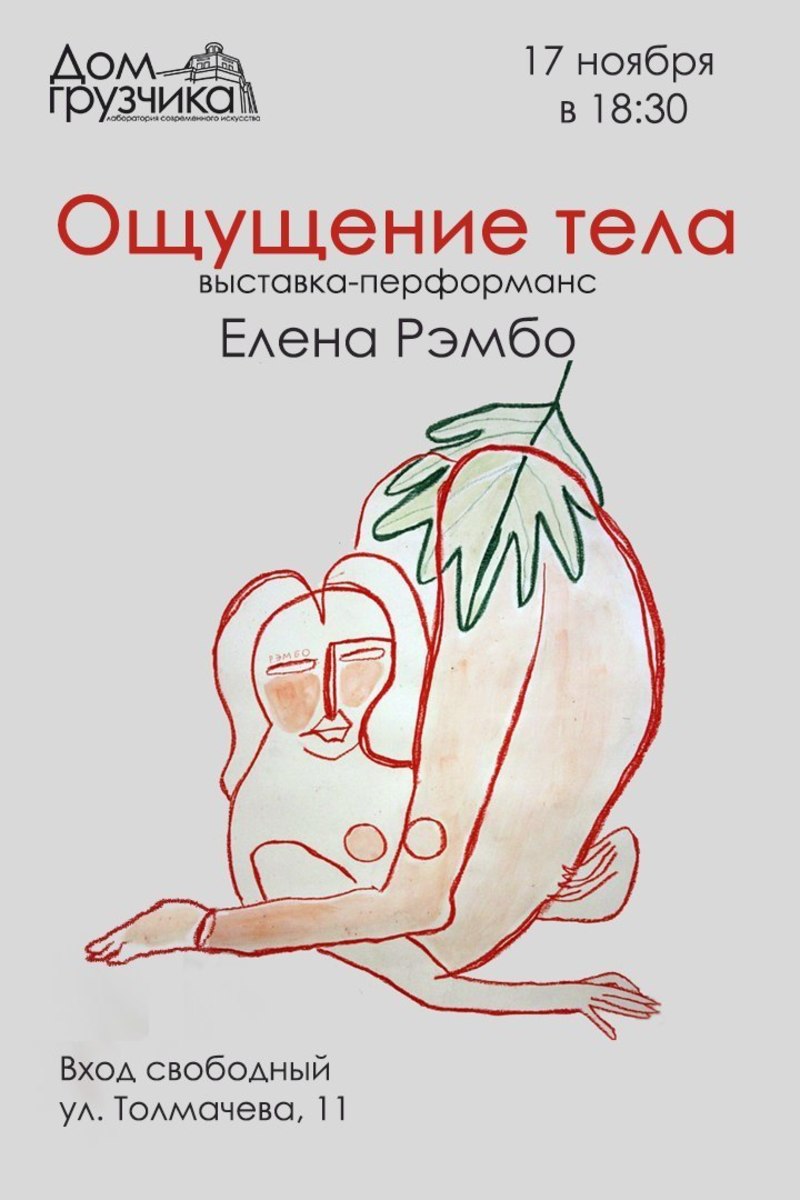 In January 2018, Loader's House residents, together with the Saratov self-organization IMHO, held the last exhibition, which was an artistic reconceptualization of the communal everyday. The largest exhibition in the history of the laboratory, it brought together eight projects from Saratov and eighteen from Perm. The artworks filled the space completely, even the bathroom.

The tradition of Kirill Krest’s annual April Fool’s Day exhibition was born at the Loader’s House and continues to this day. In 2019, Kirill held his fourth solo exhibition on the roof of Perm One Gallery. 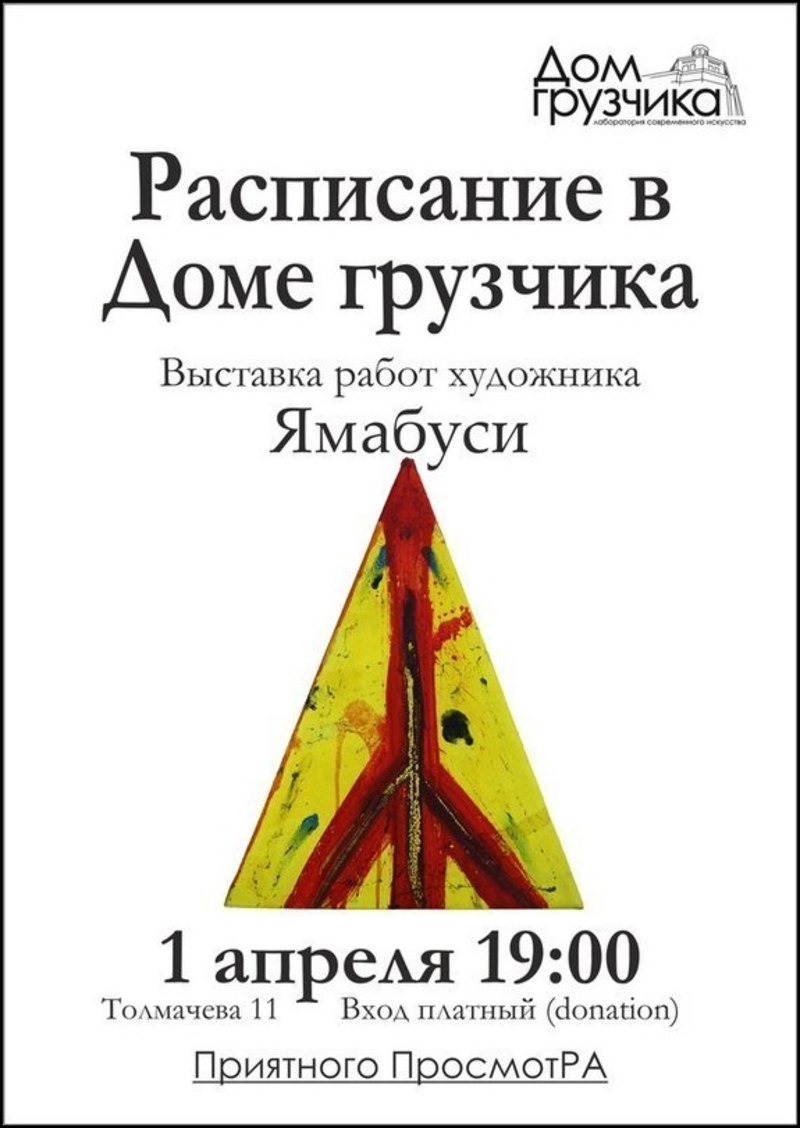 Over the three years of its existence, the format lost its momentum and its founders are currently engaged in individual projects in Moscow (Aleksey Shchigalev), Krasnodar (Alexey Ilkaev), and Berlin (Maxim Blax).

In 2015, a gallery opened at the Plus Market graffiti and street art shop. Street artist Vyacheslav Moff became its ideologist and brought in Nikita Klassen, Yulia Stolbova, Alexey Best, Boris Gulliver, and Ilya Protasov. For about a year, the gallery hosted exhibitions and masterclasses focusing primarily on the local graffiti community and covering almost all areas of street culture, from music and dance to sketching and freestyle jams.

The space ran the monthly SKETCH DAY and in good weather invited artists to take part in jams and paint a pre-agreed fence to music. The Graffuturo festival dedicated to graffiti of the future was held here twice. At the beginning of 2017, the gallery closed. It was unprofitable to retain a large space in the city center even with the support of the shop, which soon moved to a tiny space elsewhere, with the artists’ exhibition activity redirected to outside venues.

In March 2017, Anton Zhulanov established the UNITY art space. As at the Loader's House, the organizers brought together a gallery and a studio. During its brief existence, UNITY organized several exhibitions, including solo shows by the graffiti artist Boris Gulliver and the then emerging performance artist Lena Rembo.

After leaving PERMM Museum, artist, curator, and cultural promoter Mikhail Surkov launched the project PERM ONE, the idea for which had been arisen in 2012 with the support of Nikolai Novichkov, Perm Krai’s former Minister of Culture. The goal of the project was to examine whether it’s possible to “live on likes,” i.e. to organize a project within the artistic community while remaining outside of the existing economic system. The presentation of the project took place in December 2013 at Ivan Lukinykh’s exhibition Gigerrealism. The first test sale of artists' works for “likes,” the currency introduced by the PERM ONE community, took place in a garage at 22 Gorky Street. After the presentation, the garage became the base for the project.

From 2014 to 2019, exhibitions, actions, performances, and project presentations took place in the tiny space of two adjacent garages, which artists also used as studios. The project website reads: “PERM ONE PROJECT is dedicated to the creation of tools for the practical implementation of ideas, proposals, and projects conceived within the community of people interested in contemporary art across the globe.” Despite its semi-official operational status, oriented mainly toward a narrow circle of co-thinkers, PERM ONE was a legitimate contributor to art life, including participating in the annual Museum Night and the Ural Industrial Biennial’s parallel program. In 2019, it hosted Kirill Krest’s fourth annual show and the first solo exhibition of the feminist artist Vera Plekhova. Forced to close at the end of 2019 due to the demolition of the garages, the venue continued to operate as an online platform.

New self-organization formats do not aim to find a permanent site, clear boundaries, and a visible circle of participants. Compared to their predecessors, they are more mobile, open, and flexible, but also less stable.

Among such new initiatives are the TNG DIY music festival, invented by the TIKHO! (QUIET!) art group as an alternative platform for themselves and like-minded fellow Urals citizens, who for some reason are unable to find a place at the city’s official venues. Another example is the “countryside residencies” initiated by a group of Perm artists in August 2019, in the format of a collective trip to the summer houses of artists; participants are not required to create art objects, as the project itself operates as an artwork.